On 28th March 1762 ''... the said Henry Grove by his will of this date executed in the presence of three witnesses, gives, devises, limits apooints all that is Copyhold or Customary Messuage Farm Buildings, Lands, Tenements and heriditaments situate in Ludley, in the County Of Worcester in the           holding or possession of his brother William Grove or his undertenants and which are held of the Manor of the Deanry of Wolverhampton and which    he had or shortly intended to surrender to such uses as he should direct by his wife...Unto his friends George Pearpoint of Pedmore (gentleman) and Richard Pryn of Ludley aforesaid Carpenter for the term of ninetynine years to be computed from the day of his death without impeachment of waste.''

30th March 1762...'' As to the Copyhold in Lutley... All that Messuage or Tenement wherein William Grove then dwelt with all Barns Stables Buildings Gardens Orchards Curtilages Lands and Meadows Pasture and Hereditments lying in Ludley within the said manor belonging to the sais Henry Grove his heirs and Assigns for ever. (This Henry Grove lived in Stourbridge)

7th May 1763.. William Grove admitted to the Copyhold Messuage and Lands in Ludley '' to hold to him and his heirs and assigns for ever according to the custom of the said Manor by the Rents Herriotts Customs and Services due and of right accustomed''

9th December 1772. William Grove bsurrendered the copyhold to William and John Grove (of Birmingham) on payment of a fine totalling £10 and 10 shillings

29th December 1772,. Surrender as per the will of John Grove and on 15th June 1773, the administrative letters of John Grove readmit William Grove as tenant. (it gets confusing around this time)

Included in the estate '' agreed to be purchased by the Reverend John Durant of William Grove and other '' were '' the following Freehold Lands viz Two closes called Brookfurlong and half an acre of land in Lower Woefield in Cradley in the Parish of Halesowen and County of Worcester and a meadow called Long Meadow in the parish of Pedmore in the County of Worcester.

Brookfurlongs had been aquired by George Grove, father of the said Henry Grove from Francis Hill, Thomas Mansell, Elizabeth his wife and John Sowden 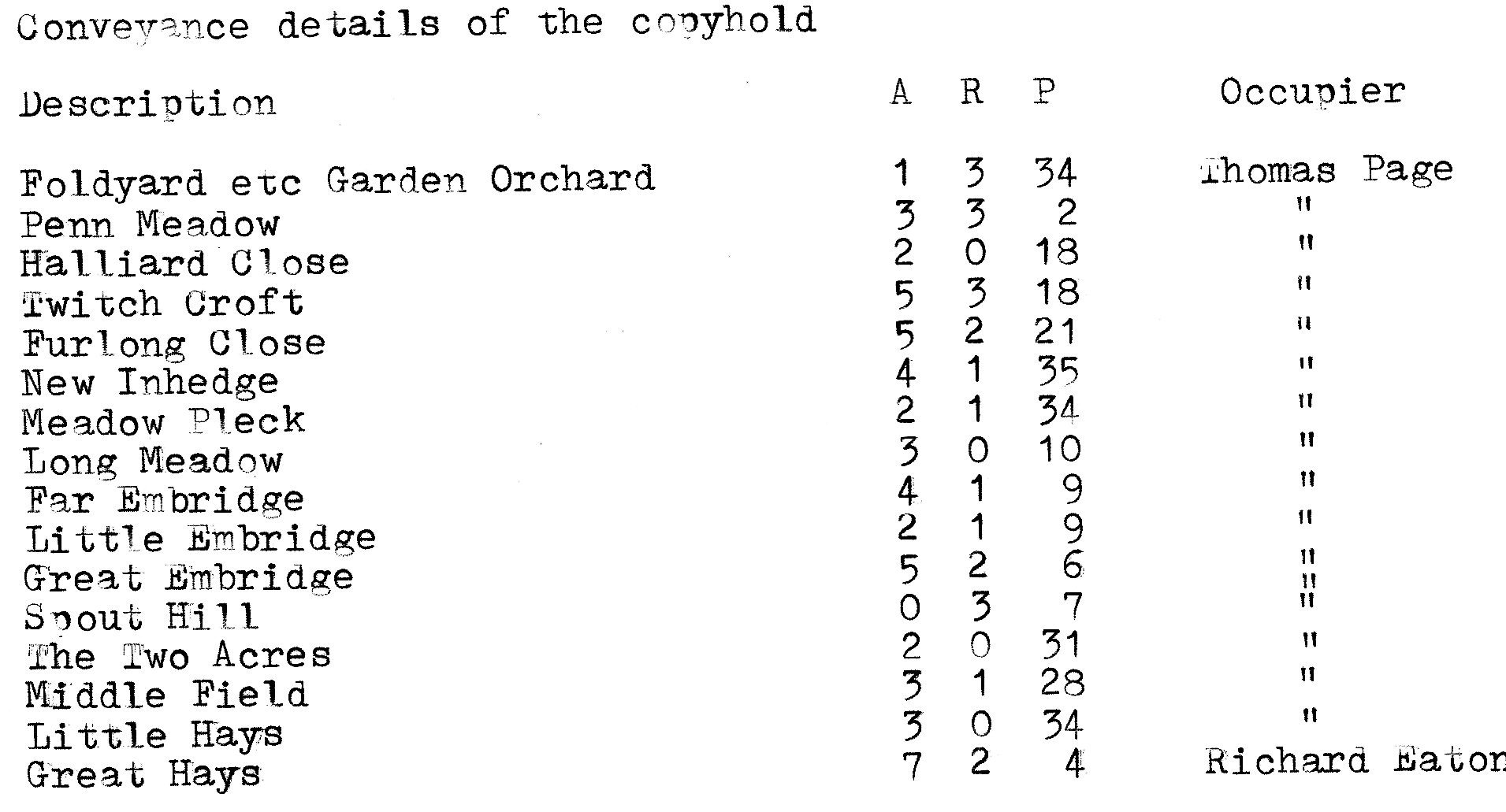 The Reverend Durant leased the land to Thomas Page for twenty one years (determinable the first three years) shortly afterwards.

Also on 18th April 1786 the tithes of these lands were granted from Boraston tp Reverend Durant.

This is, with the exception of Orchard Furlong, all the Upper Portion of Grange Farm. Durant paid Boraston £1200 for the absolute purchase.