A short article by Ian Jackson 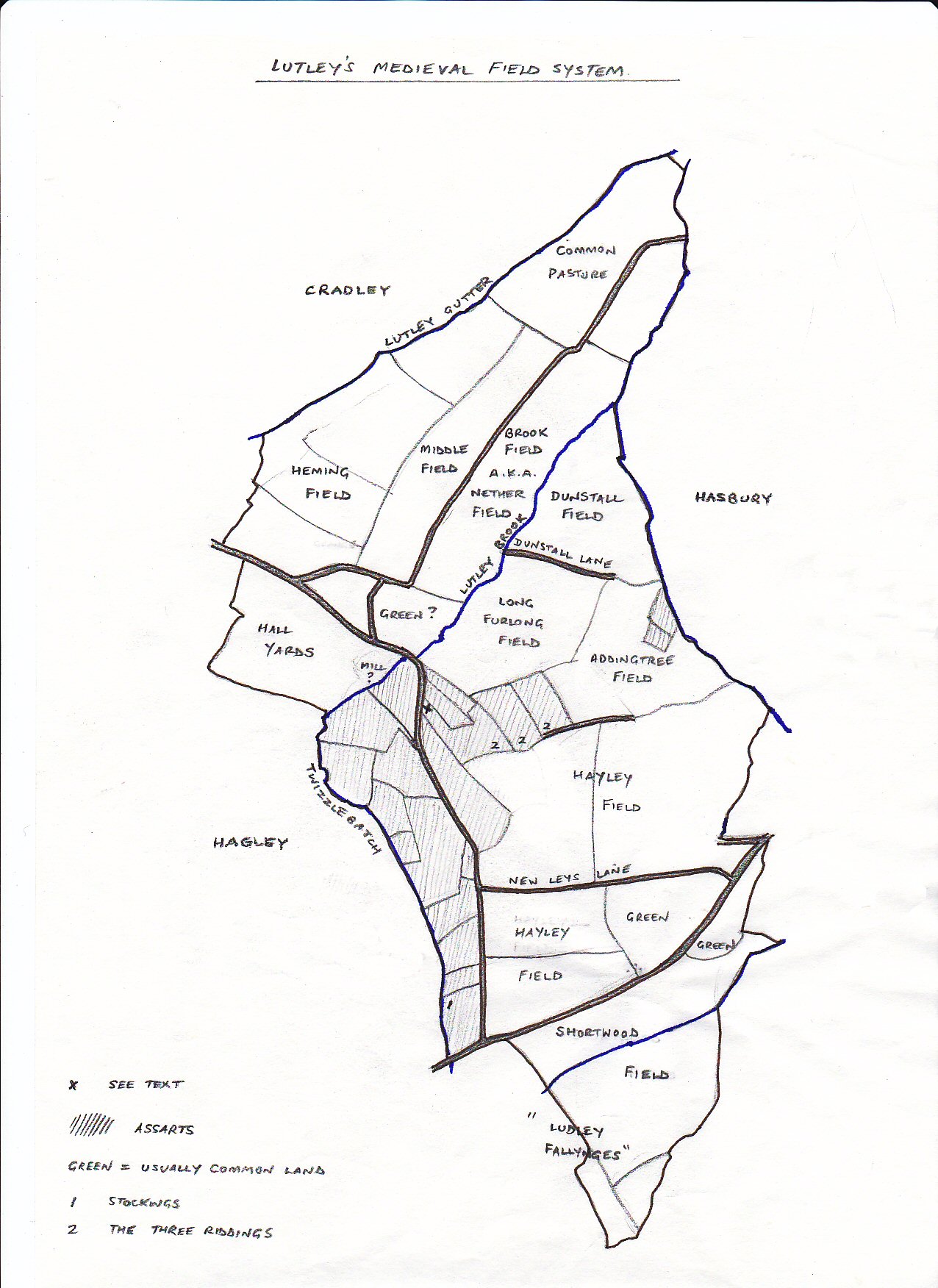 The hamlet' s three original open fields were those on the Cradley side of the manor, at Lower Lutley. The common pastureland may well have been in the " V " of the two brooks. This looks to have been enclosed at an early date; several of the fields in the 1842 Tithe Survey bear the suffix " hayes " which means hedged enclosure. The Court records mention Broomy Hayes in 1598.

The Hall Yards. These were no doubt the demesne fields where the manorial tenants performed labour services for the privilege of cultivating their own strips in the other common fields. This would have been administered by the manorial steward, proxy for the Lord of the Manor, the Dean of Wolverhampton Collegiate Church some ten miles distant. The Court books of the seventeenth century still refer to the Hall Yards, by then divided and enclosed: the name " Halliotts " on the 1842 Survey is a slovenly corruption.

Twizzlebatch is an interesting name.

" Twisla " is an Old English word meaning the land between two streams, " batch " refers to a wooded valley. Thomas of Twizzlebatch is mentioned in the 1275 Lay Subsidy Roll.

The cultivation of the Upper Lutley side of the manor began by piecemeal clearance of the woodland adjacent to Lutley Lane. Riddings and stockings are early names for assarts or enclosures of cleared woodland. This process probably began in the early 13`h century when the Dean leased out his outlying estates and relinquished tight control in exchange for money rent. As time went on, smaller common fields were opened up. Most of the original assarts seem to have been grouped into one holding, which later became part of the Grange Farm Estate. By " reverse engineering

" the acreages of these fields at the time of the 1842 survey compared to earlier documents, I have tentatively deduced that the residence belonging to this holding was situated near the X on the map.

Addingtree field may allude to a personal name, " Adda's tree

" perhaps. Trees were often an important land mark in Anglo-Saxon times. There is Huntingtree field next door in Hasbury, the village of Yieldingtree further afield, and Doddingtree was the name of one of the Worcestershire hundreds.

Dunstall means " the site of a farm " in Old English. The track separating Dunstall field and Long Furlong field became known as Dunstall Lane, although it was never much more than a wide hollowed out footpath.

Hayley fields served the outhamlet of Hayley which developed around the spring from which Spring Farm takes its name. A narrow track ran from Hayley to Lutley Lane bisecting Hayley fields. The open field alongside Hagley Causeway was later enclosed and converted to pastures called the New Leys, and this track unsurprisingly became known as New Leys Lane.

Halesowen Churchwardens ' Accounts show the church to have received a rent from a parcel of pastureland in Shortwood field from 1563-4 onwards. Later this became known as the Church Leasow. I have an idea that these were the lands called " Ludley Fallynges " granted down to Robert Dudley in 1562.

There was no formal Parliamentary Act of Enclosure for Lutley's common land and open fields. Enclosure was effected by private agreement, with those who held the most land having the biggest say. The process had already started by 1598, and although strips were still held individually in the open fields in the early 17t` century, by 1700 enclosure was as good as complete. Aside from consolidation of minor enclosures into larger fields, the pattern of the patchwork of fields from this time would be recognisable well into the 1900s.