Hilary Oldham writes to say that she believes the above photograph was taken some years before 1920.  A distant cousin of hers, Herbert Walter Payton, was  listed as Station Master there in the 1891, 1901 and 1911 census's. She has submitted the following photograph and suggests that it was taken on the same occasion as the image above 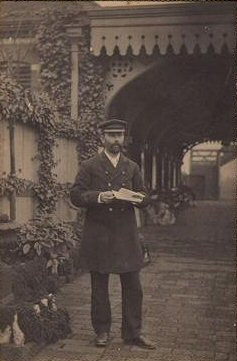 Back to Photo Index